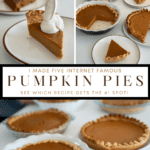 Fall season is finally here! Which means it is time for all things pumpkin spice flavored. After an especially hot summer here in Texas, it feels like such a reward to finally be here. And what better way to usher in my favorite time of year than with an internet famous pumpkin pie bake-off?

As you prep for all of your favorite fall holiday celebrations, you will want to include pumpkin pie in your dessert line up. Skip the bland store bought options and opt for a simple, but much more delicious homemade version. Your tastebuds and family will thank you!

Pumpkin pie is an iconic dessert and there are thousands of recipes online to go with it. However, choosing which one to make can be pretty overwhelming! So, I’ve decided to make five of the most famous pumpkin pie recipes on the internet to see which one is best.

The criteria for choosing which recipes to make for this bake-off is based on the number of reviews a recipe has. Essentially, I will choose the five recipes that have the most reviews on the internet. With the exception that I will not choose a recipe that is behind a paywall so that all of you can see each recipe for yourselves, should you choose to make it.

Below you will find the rankings for each recipe, what I liked, what I disliked, and what I learned when baking each one! Hopefully, all of this information will help you narrow down which pie recipe you’d like to make for your next holiday get together.

If you’ll excuse the appearance of this pie, you’ll find that is has be best flavor of the bunch! Thanks to some rookie mistakes on my end, the filling did not set properly, but I will tell you how to avoid that in the description down below.

With only 197 reviews, it is not the most internet famous, but it should be up there, if you ask me. While this pie is definitely the most labor intensive of all of the pies that I baked, it has the most flavor. So the effort is well worth it!

What I liked: This pie has the most flavor.

Sally uses a fabulous mix of spices that really go a long way in creating a great flavor profile. Unlike all of the other recipes, she uses brown sugar, heavy cream, and milk. There is no evaporated milk or condensed milk in this pie.

By creating her own spice mix and avoiding pre-made ingredients, Sally was able to create a pie that is classic but seriously elevated. It is worth the extra effort! I also really appreciated the very detailed instructions in this recipe.

What I disliked: Making your own dough is a lot of work and time consuming.

I did not love having to cut the butter and shortening in with a fork. I prefer to use my hands or a food processor, but that is just a personal preference.

Also, having to remember to chill the shortening before starting on the bake is not ideal and not something I have run into before. Just something to keep in mind if this is the recipe you choose to make!

I think we can all agree that a homemade crust is definitely better than a store bought, pre-made one. However, I’m not sure the extra effort is that much worth it at the end of the day. I ran into so many issues and have never been completely happy with any homemade crust that I have made.

What I learned: Chill the pie completely before serving.

Unfortunately, I pulled this pie out of the oven too soon. I baked it on the short end of the recommended bake time. Because this pie uses dark brown sugar, the filling is much darker and I thought it was burning. It was not and I’m sad I made that mistake!

Even worse, I did not chill this pie long enough before photographing. So, as you can see in the photos above, the filling is not quite set and a little sad looking. Don’t let that fool you though! This is the best tasting pie of the bunch, by far.

Recipe #2: Once Upon A Chef’s Perfect Pumpkin Pie

With 326 reviews, this recipe was a close second to Sally’s recipe. I actually found this recipe to be the most aesthetically pleasing out of the five pies that I made. On top of that, the flavor of the filling was really, really good. A nice depth of flavor, paired with a smooth filling, and a crisp crust make this pie a home run.

I do have to warn you that this recipe also calls for a homemade crust, which is a lot of work.

What I liked: I learned some new dough hacks.

I really appreciated being able to use a food processor for this dough, as opposed to doing it all manually. This helped to save so much time and effort in the first stages of making the crust.

What I disliked: Homemade crust is a lot of work.

The pie crust shrank a lot when pre-baking the crust. I was a little short in pie weights, so this could be because of that. However, I had too much filling because the crust shrank so much.

Also, creating the aluminum foil cover to prevent the crust from burning was really tricky and not much fun to do.

What I learned: Trust the process.

All of the various steps in this recipe had me pretty stressed out about halfway through the bake. However, once I got to the end of the recipe, I was quite pleased with the results. So, I learned to follow the steps as best as I can and trust the process. The pie turned out very pretty and very, very delicious.

I first found Chef John on YouTube when trying to learn how to make Kouign-amann. I really enjoyed his video style and instructions. So, I was quite happy to see that his pumpkin pie recipe made it into the top internet famous pumpkin pie recipes with 898 reviews.

What I liked: A simple pie that packs flavor.

This recipe is simple, but delicious. I think the addition of Chinese 5-Spice, helps give this pie some extra flavor. While the addition of egg yolks makes the filling extra smooth and creamy.

What I disliked: Not much.

There was not much to dislike with this recipe, but it did fall short when it comes to flavor in comparison to the top two.

What I learned: There’s always a middle ground.

I think this is a great option if you want a more simple recipe with better flavor and texture than the bottom two.

This Libby’s pumpkin pie recipe has 4,103 reviews online! That is the most highly reviewed recipe I could find out there. The result is a simple and classic pumpkin pie that the whole family is bound to love.

What I liked: This pie has the classic flavor.

When you think of pumpkin pie, this is what comes to mind. It is instantly recognizable and a joy to eat. You honestly can’t go wrong with this option.

What I disliked: Less flavor than other options.

If you want the most classic pumpkin pie, then this is probably your best choice. It’s definitely not as flavorful as the top three options and for that reason it is not my favorite.

What I learned: You can’t go wrong with the classics.

While I would prefer to eat one of the top three recipes, you can’t go wrong with this option. It won’t be the best pumpkin pie you’ve ever had, but it will get the job done! And, its still much better than a store bought option.

Unfortunately, last on the list is this recipe from Eagle brand. With 3,519 reviews online, this is one of the most highly reviewed pumpkin pie recipes I could find on the internet.

However, I think this was my least favorite for all of the same reasons that many people love this recipe. The recipe is extremely simple and the result is a simple, if not plain tasting pie.

That is not to say that this is a bad pie, by any means. My taste testers and I agreed that this pie tastes about like what you can buy at your local grocery store. Nothing to wow you, but still a good and tasty pie!

What I liked: The simplicity.

This pie probably has the least amount of ingredients listed for a pumpkin pie. This allows you to whip up the pie quickly and easily.

What I disliked: The lack of flavor.

While it is nice to have a recipe with minimal ingredients, I do think it prevents this pie from having any depth of flavor. It feels very one note and plain, in comparison to the other pies.

What I learned: Even a pre-made crust will fail you.

I was very sad to see that the crust on this pie shrank and fell into the filling while baking. Unfortunately, even a pre-made crust does not save you from crust woes. At least I did not spend hours making a crust only for it to have issues.

The first thing I will say is that it is pretty impossible to make a bad pumpkin pie. While some of these are definitely better than others, each one of these internet famous pumpkin pie recipes were tasty and guaranteed to be a hit at your next holiday party.

I would say that everyone who tried all of these pies agreed that the fillings with more ingredients and spices created a pie with more depth of flavor.

For instance, using granulated sugar, brown sugar, and evaporated milk instead of allowing all of the sweetener and cream to come from condensed milk always results in a better flavor.

If you like this style of content, we’ve done similar posts for Chocolate Chip Cookies, Oatmeal Cream Pies, and Biscuits. We’ve even made a list of our Favorite Great British Bake-Off Recipes. Check them out and let us know what else you’d like to see us do a bake-off for down in the comments below!