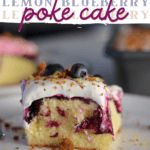 This Lemon Blueberry Poke Cake is the perfect dessert for summer. It consists of a light and fluffy yellow cake, filled with pockets of fresh blueberry compote, topped with whipped lemon crème fraîche and a cinnamon graham cracker crumble.

Listen, I am going to be really honest about this recipe. While it’s one of my better ones, it’s also one of the more complicated ones. It has four separate components, each made from scratch. While each component is easy to make, putting them all together can be a quite a bit of work.

However, I believe it’s worth it! The result is one of the best summer desserts you’ll ever make. If you think you can juggle making four mini recipes at once, then keep reading for a recipe walkthrough of this delicious Lemon Blueberry Poke Cake.

As always you can find the recipe card down at the bottom of the post if you’d rather skip all the process shots and recipe notes listed below.

To get started on this Lemon Blueberry Poke Cake recipe, you’ll need to make a yellow cake. I found inspiration for this classic yellow cake recipe from BraveTart’s Iconic American Dessert Cookbook. It’s light and fluffy, not too sweet, and super easy to make! It’s the perfect companion to all of the other flavors that will be added.

Using the paddle attachment of a stand mixer, cream everything together on medium to high speed for five minutes, until the mixture is light and fluffy.

Be sure to scrape down the sides and bottom of the bowl halfway through mixing to prevent any lumps from forming.

Continue mixing on low speed and add egg yolks one at a time, mixing until each one is fully incorporated before adding the next.

Mix on low to medium speed until the vanilla is completely mixed in.

Step 5: Pour the batter into the cake pan and bake.

Bake at 350ºF for 25 minutes, until the top of the cake is golden brown and a toothpick inserted in the middle comes out clean, or until it reaches 210ºF.

There is nothing sweeter in the summertime than a fresh compote to go with your bakes. This blueberry compote recipe is very simple and easy to make. You’ll want to get this started while the cake is baking so it can cool along with the cake before assembly.

It’s a two part recipe that primarily consists of stirring the ingredients together. All you need is some fresh blueberries, sugar, water, and some lemon juice.

Step 1: Cook half of the blueberries, sugar, water, and lemon juice over medium heat for 10 minutes.

In a large saucepan, cook down the sugar, water, and lemon juice with half of the blueberries. Be sure to stir the mixture occasionally to prevent any burning.

Step 2: Add the rest of the blueberries and cook for another 8 minutes.

Cook down the rest of the blueberries, stirring occasionally.

Once you’ve finished the blueberry compote, you’ll want to get started on the Cinnamon Graham Cracker Crumble recipe. You can find the Getting it prepped while the cake is baking will allow you to immediately put it in the oven once the cake is done.

If you work quickly you can get everything cooling together and ready for assembly.

Mix until all of the ingredients are evenly dispersed.

Stir until all of the crumbs are completely coated in the butter.

Once the crumble gets crispy and crunchy, remove from the oven. You can cook for longer or shorter, depending on how crispy or not crispy you want your graham cracker crumble.

You’ll want to make the Lemon Crème Fraîche once all of the other components are fully cooled, as you will assemble to cake as soon as it is made.

Luckily, this last part of the recipe is only one step. Put your four ingredients in the stand mixer and whip together until light and fluffy.

Using the whisk attachment on high speed, whisk all of the ingredients together until stiff peaks begin to form, about 3-5 minutes.

Now that all of the components are made, all you have to do is put them together. All you have to do is poke some holes evenly across the cake, fill them with blueberry compote, top with whipped lemon crème fraîche, and sprinkle with cinnamon graham cracker crumble. And voila! You have a Lemon Blueberry Poke Cake ready to eat 🙂

Step 1: Poke holes evenly across the cake for the filling.

I typically use the handle of a wooden spoon to poke the hole in the cake. But, anything that can create pockets across the cake for the filling will do.

Step 2: Pour the blueberry compote over the top of the cake.

Be sure to fill the holes with the compote while spreading it over the top.

Step 3: Spread the lemon crème fraîche over the blueberry compote, before sprinkling with the graham cracker crumble.

When spreading the whipped lemon crème fraîche be careful not to let the blueberry compote bleed through. This requires a gentle and patient hand.

Finish up with a generous sprinkle of the cinnamon graham cracker crumble before serving your Lemon Blueberry Poke Cake.

And that’s it! You’ve just made a Lemon Blueberry Poke Cake. You deserve a reward or something, ’cause that was a a lot of work! Good thing you have a delicious treat to celebrate with 🙂

If you like this poke cake recipe, be sure to check out our Key Lime Poke Cake recipe and our Chocolate Pudding Poke Cake recipe. Let me know what you think of the recipe down in the comments down below.

For the Blueberry Compote

For the Cinnamon Graham Cracker Crumble

For the Lemon Crème Fraîche

The Graham Cracker Crumble can be made a day or two in advance if you wish to break up the work for this recipe.

Store the cake in the refrigerator.

Is there a substitute for crème fraîche?

Sour cream is the most commonly recommended substitute, but I'm not sure how it would work for this application. If you have cream and buttermilk, you can make homemade crème fraîche overnight. Check out the lemon cream from our lemon cream tart for another option that's a bit easier to make.