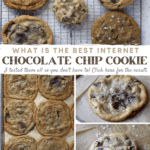 With so many opinions on what makes a good chocolate chip cookie, there are thousands of recipes out there claiming to be the best. So, I decided to put it to the test. I made five of the most popular chocolate chip cookie recipes on the internet to compare. I even went as far as making all of the cookies on the same day so I could have a side by side comparisons of each cookie as they came out of the oven.

As you can see from the photo above, each batch of cookie dough is vastly different from one another. And they don’t just look different, they all have a unique flavor profile to set them apart from the rest. This was an interesting experiment considering that each of these recipes had so many similar ingredients, but turned out so different based on slight ingredient changes and different preparation techniques.

I chose the five most famous recipes that I could find online, starting with the recipes that appear to have the most reviews. One of the batches I made has 36k online reviews, which is insane! Another factor that went into choosing which recipe to make, was the popularity on the internet, like Kenji’s recipe that is extremely well known but has less reviews than others out there.

The recipes range from simple to fairly complicated. While most of the ingredients are the same, the main differences can be found in technique and the types of chocolate used. Three out of the five recipes that I made required some type of chilling the dough before baking and two recipes called for browned butter. Only one recipe called for walnuts, but I went ahead and included it because it had 18k reviews! With that many reviews, I simply could not leave it out.

My favorite recipe out of all five has to be the Chocolate Chip cookies from Bon Appetit. This recipe has 1,187 reviews, making it one of the more reviewed recipes out there.

I appreciated the simplicity of the recipe and the added bonus of not having to chill the dough. The addition of brown butter makes a huge difference in the flavor profile of the cookie and while it is an additional step in the preparation, I would say that it is well worth it.

Don’t make the mistake that I did and overcrowd the cookie sheet when baking. As you can see in the photo above, I crowded the sheet pan with 12 balls of dough. I think it would be better with 6-8 balls of dough instead. It’s better to make multiple batches than have all of your cookies crowd into each other.

What I learned: Brown butter makes all the difference.

As I have gotten more invested in baking, I keep seeing brown butter pop up as a delicious addition to any bake. I’ll be honest and admit that in my lazier moments, I often doubted it was worth the effort.

However, this experiment has proved me wrong. Brown butter is worth the effort and that effort is actually pretty minimal. The hardest part of the whole ordeal is getting the browned butter cooled to the correct consistency for the bake.

The simple addition of brown butter in this cookie creates such an impact on the flavor profile that it absolutely cannot be ignored. I’d like to argue that all chocolate chip cookie recipes should call for brown butter. It’s that good!

Unsurprisingly, these cookies from Alvin Zhou at Tasty were a close second to the Bon Appetit cookies. While the recipe does not call for brown butter, it does develop a rich flavor profile thanks to the overnight chilling of the dough in the fridge. These are some seriously tasty cookies, that’s for sure.

Apparently many other people agree since this chocolate chip cookie recipe has 36k reviews! That is the highest amount of reviews I have ever seen for a recipe in my life. It is as good as all of the reviews say and worth the effort and patience it takes to prepare.

What I learned: Chilling the dough is important.

While it may seem like a nuisance to chill your cookie dough before baking, it does have some serious payoff. This recipe only required a minimum of 30 minutes to chill in the fridge, but I decided to go for the overnight chill option instead.

Chilling the dough in the fridge overnight accomplishes two things. First, it hardens the butter and prevents it from melting as quickly in the oven. This helps prevent the cookie from spreading out too much in the oven and resulting in a flat disc. Secondly, it allows the dry ingredients in the dough to become hydrated by the wet ingredients. This helps the flavors to develop more richly.

With 10,325 online reviews, I knew this recipe would be a good one! While it’s not my very favorite in the list, it is still such a good cookie. I also learned a little bit of what it takes to change the structure of a cookie with different types of flour.

I also think that these cookies are the best looking out of the whole bunch. If you want to impress your friends with gorgeous looking batch of cookies, you might want to try these! The added touch of sea salt on top elevates this pretty cookies into an impressive and tasty option for your next bake.

The addition of bread flour and cake flour instead of all purpose flour creates a fluffier cookie. It also doesn’t hurt that each dough ball weights 3.5 ounces. That’s a giant cookie.

Bread flour has a little bit more protein than all purpose flour. This results in more gluten in the dough and gives the cookies more structure aka chewiness. Cake flour has the least amount of protein and by using it with bread flour, it ensures that the cookie retains some tenderness. By using both flours, you get a nice balance of texture between chewy and tender.

Listen, when I saw that this chocolate chip cookie recipe had 19,609 reviews, I just knew that I had to include it in my test. This was probably the most simple recipe out of all five that I tested and I think that’s why it has so many positive reviews.

It’s a simple cookie recipe that yields some pretty good cookies. If you’re not all that picky, these cookies are probably just fine for a quick and easy bake. I think the size and texture of these cookies are an added bonus for a classic cookie.

What I learned: Fillings make all the difference.

The additions of walnuts in this cookie makes all of the difference. Personally, I think no chocolate chip cookie is complete without the addition of walnuts. It’s a great way to balance out the sweetness of the cookie and add some much needed texture.

Also, I think every recipe I have made so far could benefit from less chocolate added. I found that almost every recipe had so much chocolate added that you could barely taste the actual cookie. Listen, I am all for some chocolate, but I don’t think I cookie should be completely stuffed with it.

The last recipe in this roundup is the famous chocolate chip cookies from Kenji Lopez. Often praised as the best recipe out there, I was excited to try my hand at this popular recipe. Despite multiple warnings from various other blogs about the difficulty of this recipe, I still managed to mess up somewhere along this bake. I’m still not sure where I went wrong.

With only 304 reviews, I should have known that I would run into some issues, but I was overly confident going into this bake. I certainly did not think I could be bested by a chocolate chip cookie recipe. How wrong I was! Ultimately, I have a healthy respect for the level of difficulty for this recipe, but I don’t think I’ll be itching to make it again. After the effort it took to make these cookies, only for them to not turn out, I must admit that I am a little annoyed at the outcome.

What I learned: Sometimes the tricky recipes aren’t worth the effort.

After baking my way through five chocolate chip cookie recipes, I’ve come to the conclusion that tricky recipes are not worth the effort. I am aware that these cookies did not turn out because of some wrongdoing on my part, but I don’t think cookies should be something that is difficult to make.

As you can see, all of the other recipes that I made managed to turn out. I’ll still come back to this recipe to see if I can troubleshoot my issue, but I don’t think these will ever be my favorite cookies to make. Personally, I don’t think cookies are the recipes that I want to spend my time trying to master difficult baking techniques. The payoff isn’t nearly worth too much extra effort, in my opinion.

I think of cookies as a simple and tasty treat that can be whipped up pretty quickly with minimal effort. If I want to challenge myself in the kitchen, I’ll do that with a layer cake, pastry, or bread.

Ultimately we all have our own preferences when it comes to what makes a cookie a perfect cookie. However, after making all of these internet favorite recipes, I’d say that there are some common techniques that we should all be using when it comes to making our cookies.

First of all, just brown the butter! It makes such a difference and you’ll thank me later. Secondly, chilling the dough before baking, even just for 30 minutes, is a great technique to use to prevent super flat cookies. And lastly, when it comes to fillings, a little less chocolate is a good thing and the addition of walnuts is even better!

What do you guys think is the best chocolate chip cookie on the internet? Let me know down in the comments below! If there’s a recipe I missed and you’d like to see it on this roundup, let me know. I plan to create my own recipe for the ultimate chocolate chip cookie based off of what I have learned here, so stay tuned for that!

I really appreciate all the effort you made for classic cookie 🍪 I think I’m going to try out 2 of the 5 you made. Browned butter sounds amazing, I can’t wait to taste them. I’m a professional baker and always chill my dough, ALWAYS or at least 2 hours. It really make a big difference in the texture and taste of these amazing little balls of love. I also agree with you, not to overloading with chocolate. If want to eat chocolate I’ll grab a box. Just a little tip I found in chocolates is to chop your own dark chocolate, that way I have control over the amount and flavor. Again thanks for all your efforts, and you sweat. 😍

Thanks for sharing so many recipes. Just wanted to know if you had any good apple cookie recipes to share. Thank you.