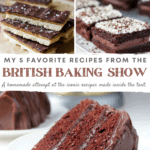 I started with simple recipes to get into the swing of things, but I have finally started to bake my way through the iconic bakes made in the tent! I’ve always drooled over the bakes created in the tent and wanted to try my hand at making them at home. So, now that I have a bit more baking experience under my belt, I have done just that.

I thought it would be a great idea to share my five favorite recipes and some tips for success I learned along the way. If you’re interested in learning how to achieve these famous bakes from the comfort of your own home with the help of American ingredient alternatives, then you’ll find that info below.

I chose the five following recipes for a few reasons. This first reason I chose a recipe would be the flavors, because, as you can tell, I am a sucker for chocolate. And if I am going to spend hours baking, I would like to thoroughly enjoy the fruits of my labor. So, yes, there are mostly chocolate options here.

The second determining factor for these recipes, was based on the skills I was able to learn. You’ll see that a lot of these recipes feature caramel. This is because I have always wanted to learn how to successfully make caramel. For the most part, it was much easier than I thought!

Each of these recipes were able to help me learn some new skills and hone my current ones in the kitchen. Now I feel much more confident in judging what various cake batters should look like and when a sponge is fully cooked. I still have a lot to learn, but these recipes taught me a lot about baking.

You’ll notice a few foreign ingredients in each of these recipes that are not available here in the US. There were a few that I had never heard of, but luckily for you, I found all of the alternatives that can be found here in the States.

While this recipe looks fairly fancy, it’s actually pretty simple. It’s brownies, layered with chocolate pudding, and topped with whipped cream. Each layer is made from scratch and more delicious than the last. I think this might be my favorite bake out of the whole lot, if we’re being honest!

I imagine that you could recreate this via boxed brownies layered with pre-made pudding and whipped cream. However, I do believe that it is worth the extra effort of making each layer from scratch. The result is a decadent and rich dessert that will wow you and anyone you share it with.

The first thing that I learned making this dessert, is the value of patience. I had never made a shortbread before this and was quite panicked while making the dough. When all the dough ingredients are mixed together, they still resemble a flour like texture that looks nothing like a dough. However, after kneading the dough as instructed, it did all come together.

The secret is to gently work and press the flour-like dough together until some of the butter starts to melt in the mixture and the consistency becomes a real dough. When I first started the recipe, I did not trust that it would all come together and almost started over because I thought I did something wrong. My husband reminded me to be patient and it paid off!

You will also need lots of patience to make the peanut butter caramel layer. After all, the secret to making caramel is patience. It takes a while for the sugar to caramelize to the right color, but once it happens it happens fast! I managed to burn my first batch of caramel, but it taught me what color is should be looking for and how quickly things change at the end.

This recipe was probably the most simple one out of the whole batch listed here. All you have to do is whip up the batter and make a quick caramel to drizzle on top.

Since I had already made caramel for a previous recipe, I felt confident going into this recipe. I was so pleased to only have to make the caramel one time! It confirmed that my goal to pick up some skills baking my way through these recipes is achievable.

If I were to change anything that I did while making this recipe, it would be to use a more ornate baking tin. The bundt tin that I used is pretty plain, which helps with getting the cake out of the pan easily, but does not look as pretty as a more ornate shaped tin would make it.

I’ve always been a big sucker for anything chocolate, which is why I had to make this Devil’s Food Chocolate cake. It is everything that a spectacular chocolate cake should be: moist, fluffy, and rich. It’s a relatively simple recipe, with only a few things to look out for.

My favorite part of this recipe is the fudge frosting. It’s one of the easiest fudge frosting recipes I have ever made. All you have to do is melt butter and heavy cream together before pouring over chocolate chips to melt. Which is a walk in the park, compared to the other recipes that I have made that require tempering chocolate and food thermometers.

The tricky part of this recipe is at the tail end of the cake portion of the recipe. Before the batter is complete and ready to be poured into the baking tins, you’ll have to fold in a chocolate liquid into the batter. I made the mistake of not mixing enough and leaving some lumps in the batter. This resulted in a few vanilla spots of batter visible throughout the chocolate sponges.

Ultimately, it did not change the flavor of the cake but it was very visible. So, learn from my mistakes and take more time to gently fold the liquid chocolate into the batter until it is completely incorporated!

This cake earned Kate the coveted Star Baker on the episode that she made it. Prue even asked for the recipe! So, I just knew I had to try my hand at it. Overall it went well, but there were a few things I learned with this recipe.

I made this mistake of making this cake into a two layer cake instead of a three layer cake, as directed in the recipe. Lazily, I chose to make two layers instead of three because I only have two identical 9-inch cake pans and did not want to make the sponges in multiple stages.

I thought that I was being clever, however, it turns out that three layers are better for the frosting to sponge ratios. It allows for thinner layers of the sponge to be stacked with an additional layer of frosting. This prevents the cake from tasting like overly thick layers of dry sponge.

I also had to make caramel for this recipe, as well. I thought I had the art of caramel making down by the time that I made this, but I was instantly humbled. It took me five tries to get the caramel right. However, each failed attempt taught me something new and I am much more confident in my caramel making skills now.

And there you have it! Five incredible recipes from some of my favorite contestants on the show. It was definitely a learning curve making each of these recipes. I’ve always known that the bakers are extremely talented, but I have so much respect for them for being able to complete these recipes in that tent.