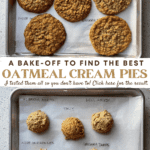 Have you ever had a homemade Oatmeal Cream Pie? If not, you’re missing out! It’s one of the easier “fancy” recipes you can make at home. My husband requested that I do just that, after trying an Oatmeal Cream Pie at a local bakery here in Austin, TX.

I was curious to see what exactly makes the “ultimate” Oatmeal Cream Pie. Is it a super soft cookie? Or a golden, chewy one? Also, what makes the perfect marshmallow filling? These are the questions I needed answers to. So, I made the top 5 reviewed Oatmeal Cream Pie recipes online for comparison.

I made sure to make all five of the recipes on the same day, so I could compare each one side by side for the most accurate result.

I find it helpful to see side by side comparisons of the dough before and after it has been baked. My goal here is to learn what Oatmeal Cream Pie recipe is the best, but also to learn why it is the best. Seeing how each ingredient list produces a different result, teaches me how to achieve certain results as I learn my way in baking.

When deciding what recipes to test for my Oatmeal Cream Pie Bake-Off, I wanted to test the five most highly reviewed recipes that I could find online. While each recipe does have some similarity with the others, there are also plenty of differences to be found among them.

Some of the recipes call for molasses, while others use shortening in the place of butter. Some of the doughs were very slack, while the others were quite thick. But all of the recipes were simple and similar in terms of process.

The biggest differences came down to the amounts of oats used, whether shortening was used, or the inclusion of molasses. The slight tweaks in the ingredient lists made for an excellent learning opportunity for a novice baker like myself.

I feel much more confident in knowing how each ingredient influences the outcome of the bake, which was the goal. The things that I am able to learn are my favorite part of doing Bake-Off experiments. Having a better understanding of how ingredients interact will allow me to create more original recipes.

I was surprised to find that one of the recipes with the least amount of reviews was the best of the bunch. With only 60 reviews, this recipe from Inside BruCrew Life was a favorite by a long shot.

This dough was significantly more slack than most of the others. This resulted in a more golden and chewy cookie that was the perfect contrast to the fluffy marshmallow filling.

While this recipe is pretty similar to most of the others, it does differ in that it includes shorting, in addition to butter, in both the cookie and the filling. The inclusion of shortening was key in achieving the texture of both elements.

However, unlike the recipe from Inside BruCrew Life, this recipe did not have any butter in it. It also had less cinnamon included, which was apparent in the flavor profile. If you don’t love cinnamon all that much, then this option might be better for you.

Otherwise, this recipe is incredibly similar to our number one pick. The cookies were also nice and chewy with a fluffy marshmallow filling.

I would say that this recipe is the closest to the iconic Little Debbie Oatmeal Creme Pies. With 341 reviews online, it is a popular pick. However, out of the five recipes this one fell to spot #3 for us.

Surprisingly, we did not love the super soft cookies. While it is more traditional, we found that we prefer a chewier cookie instead. This recipe also has the most molasses in it, which results in a very strong molasses flavor. If you like molasses, then this cookie is the one for you!

The marshmallow filling in this recipe was the most “marshmallowy” out of all five of the recipes. It was smoother, shinier, and fluffier. I think it might have been my favorite filling.

One day I would like to put this filling in the Inside BruCrew Life cookie and see how they pair together!

With 63 reviews online, I did not think this would be one of the top recipes. But based on the ingredient list of this recipe, my husband assumed that this would be his favorite of the bunch. However, once we tested all of the recipes we found it to be 4th on the list.

We found the cookie to be textured and thick. This recipe called for the most oats out of all five recipes. It has 300 grams (300!) of quick oats. And that is just too much oats. It also only uses one egg, as opposed to two like all of the other recipes.

It is definitely the most unique recipe on the list and was good. However, because of its’ differences, it was not the best.

This recipe from My Baking Addiction is one of the most highly reviewed recipes I have seen online. With 1,136 positive reviews, I figured that this would be the obvious favorite in the taste test.

However, this was the least favorite for all of our testers. This recipe called for 3 cups of quick oats, which is too much oats. Yes, these are oatmeal cookies, but 3 cups of oats results in a much denser dough. The result is a very thick and, in my opinion, dry cookie.

Also, this recipe swaps out marshmallow fluff filling for a buttercream filling. The result is an overly sweet filling that does not mesh well with the cookie. For me, the textures were all wrong.

While I do think it is clever to use buttercream for the filling in place of the marshmallow filling, I don’t think it tastes as good. I think it’s a great option if you’re in a pinch and you find yourself out of marshmallow fluff.

All of these recipe were good! But, I learned a lot about what I prefer when cooking and eating an Oatmeal Cream Pie. This Oatmeal Cream Pie Bake-Off was a fun and tasty way to learn how to make this iconic dessert.

Ultimately, I think it comes down to personal preference when it comes to what makes the ultimate Oatmeal Cream Pie. Lucky for you, this bake-off has something for everyone! If you like chewy cookies like us, then option #1 is for you. If you prefer soft cookies, then option #3 is for you! And if you like a fluffy, oat filled cookie then options #4 and #5 just might be your speed.

You could always conduct a bake-off yourself and see what you like best! Would you bake all five of these recipes? Which do you think would be your favorite of the bunch? Let us know down in the comments below.