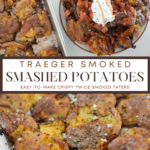 If you thought high heat roasting on a Traeger grill was impossible, think again! These Traeger smashed potatoes are extra crispy, golden brown flavor bombs that are double smoked. That’s right, similar to my air fryer smashed potatoes, you get to skip boiling and double roast right on the grill.

These Traeger smoked smashed potatoes are finished at 500ºF for about 30 minutes, making them an ideal side dish for high heat cooks like grilled chicken breast or burgers. Or you can spin them into an awesome appetizer with a little bacon, sour cream, and chives.

But enough talk, let’s learn how to make them.

Similar to fries, I like to salt at the end instead of adding to the seasoning blend. Feel free to experiment with the herbs and spices here. A good shortcut ingredient is ranch seasoning like I used for my air fryer potato wedges.

How to Make Smashed Potatoes on a Traeger

I used a Traeger Pro 575 and Signature pellets for this recipe. Cook times may vary between Traeger models and other pellet smokers. I’ll give visual cues for each step so you know what to look for.

I used a beef tallow from South Chicago Packing, but your local butcher likely sells it. You can also make your own. Using beef fat adds a ton of flavor and truly elevates these smashed potatoes.

2. Smoke the potatoes on a Traeger for 20 minutes at 500ºF until fork tender.

Go directly on the pellet grill grates and aim to keep the potatoes concentrated to the center of the grill so you don’t have any potatoes over the hot spots at the front and back of the Traeger. That way the potatoes cook without the skins getting too dark on the first roast.

3. Toss the smoked potatoes with four tablespoons of fat before seasoning.

Once the potatoes are fork tender, they’re ready to be smashed. Again, you’re not looking to pick up too much color in the first stint on the Traeger.

If you’re using beef tallow or butter, the residual heat from the potatoes will do the melting work for you.

You can use a large mixing bowl to make easier work of seasoning the potatoes before smashing, but I like to keep the dishwashing to a minimum and use the same sheet pan for every step.

4. Smash the potatoes with the bottom of a heat proof glass or tumbler.

You want the smashed potatoes as thin as possible without completely mashing and breaking apart. If you do over smash and have loose bits of potato, don’t discard them. Just leave them on the sheet pan, and they’ll get nice and crispy in the second run on the Traeger.

The recipe card below mentions spacing the smashed potatoes out between two sheet pans to make extra crispy potatoes. The extra air flow will also speed up the cook.

5. Smoke the smashed potatoes for an additional 30 minutes at 500ºF.

You’re looking for crispy golden brown exteriors without too many dark spots. Some of the extra thin potatoes will be extra crispy like potato chips, while the thicker pieces will still be a little fluffy in the center.

Once you pull the potatoes off the Traeger, season with salt to taste and garnish with a little chopped parsley or chives.

Ideas for What to Cook with the Potatoes

I mentioned throwing these smashed potatoes back on on the Traeger for the second half of the cook alongside a main dish. Ideally, you’re looking for high heat cooks in the 450ºF to 500ºF range like some of the following recipes:

Though if you had something like smoked pork tenderloin or a slow smoked tri tip going, you could always smoke the potatoes for longer for the first part of the cook and crank the temperature at the end while the meat rests.

Now, it’s time to get grilling. If you have a question about these pellet smoker smashed potatoes, drop it in the comments below. And if you try this recipe and love it, we always appreciate recipe reviews!