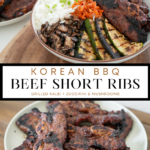 Have you ever seen flanken short ribs or L.A. style ribs on the shelves and wondered what to make with it? The most obvious answer is Kalbi, a Korean-American dish where the ribs hang out in a sweet, salty, umami, and tenderizing marinade before they’re grilled.

In this recipe I’ll show you how to make this Korean BBQ staple alongside grilled zucchini and mushrooms with a sesame glaze on a Traeger grill (or any grill).

You’ll see this style of beef called both Kalbi and Galbi. I’ve seen some people say the terms are interchangeable and others say Kalbi is made with flanken short ribs while Galbi is made with English-style ribs that are sliced into long flat strips with the in-tact bone at one end.

Personally, I’ve only ever seen the flanken beef short ribs or L.A. style ribs in stores. (Even at Austin’s Asian giant supermarket, H-Mart.) You can buy English short ribs and slice them into long strips, but I’d rather go with the option that’s ready to go straight in a marinade. This video will teach you how to cut beef ribs for Kalbi or Galbi.

All that to say, either style of short ribs will work with this marinade.

It’s worth noting, the flanken style short ribs I used are thicker and shorter than some. Thinner, longer cuts will cook a bit faster. That’s just something to keep in mind!

Your staple ingredients tend to be aromatics like garlic, ginger, and scallions alongside soy sauce and toasted sesame oil.

Then you have a sweet component that changes from one recipe to another. My recipe calls for brown sugar and mirin, a sweet Japanese rice wine. (Mirin substitutes.)

You’ll also get some sweetness from the fruit in the marinade, but the fruit plays another primary role in a Kalbi marinade. Kiwi has an enzyme called actinidin that breaks down proteins and tenderizes meat, and that’s essential when you’re looking to cook a piece of beef like short rib quickly. Asian pear has a similar enzyme, and you’ll see it used regularly in marinades as well.

Aside from those components, my recipe adds a black pepper and toasted sesame seeds. Everything is blended together and poured over the flanken short ribs to hang out overnight and up to 24 hours. With the enzymes from the fruit, you want to be careful not to marinate too long.

How to Grill Flanken Short Ribs on a Traeger

Hot and fast. If you’re using a Traeger, set it to 500ºF or the max temperature and be sure to let the grill preheat for 10-15 minutes. You want the grill grates to be as hot as possible.

If you’ve seen my Traeger beef fajitas recipe, you know about the hot spots around the front and back of the grates on a Traeger. These spots are best for browning and caramelizing meat and veggies. You can rotate the meat around to get even heat and optimal browning on every piece.

One additional tip for browning is to pat the beef dry with a paper towel before going on the grill. The excess moisture from any remaining marinade will inhibit the Maillard reaction.

As you’ll see in the veggies section below, I used a cast iron grill plate for the mushrooms. Interestingly, when I tested grilling some of the beef short ribs on the grill plate, it didn’t do any better than the grill grates alone. I thought surely the extra surface area would make a difference, but being near the hot spots on the grill was the key.

This is an optional addition, but I think this duo works great with Kalbi. I use a smaller Traeger Pro 575, which has some trouble fitting all the beef and veggies at once. If you have a larger grill, everything goes on together for about the same time. Perfect match, right?

The recipe calls for using a cast iron or mesh grill plate for the mushrooms, but a cast iron skillet would work fine in a pinch.

I served the finished Kalbi and grilled vegetables with rice and kimchi. That’s about all you need.

In my recipe for Asian-inspired Grilled Esquites, I mentioned the inspiration came from Chef Roy Choi’s Las Vegas restaurant, Best Friend. We had his L.A. style Mexican street corn salad alongside his Kalbi, Spicy Pork, and Kimchi Fried Rice. It’s a match made in heaven.

You can throw the corn and jalapeño for my esquites straight on the Traeger grill at 500ºF alongside the Kalbi and other veggies as well.

If “kimchi fried rice” caught your attention, they actually have a video showing how they make it.

And as you’ll see in my recipe video below, I use leftovers to make Kalbi fried rice.

How to Make Kalbi on a Traeger Grill (Recipe Video)

Here’s something for my fellow visual learners.

Okay, you will find the printable recipe card below with a few additional ingredient notes. Don’t hesitate to drop any questions you have about the recipe below in the comments. And if you love these grilled flanken cut short ribs, we always appreciate recipe reviews!

For the Grilled Vegetables

For the Vegetable Glaze

*This marinade should work for anywhere between 2-3 pounds of short ribs. If you can't find flanken short ribs, you can slice whole short ribs to create long strips for Kalbi. See the post above for more tips.

I used a Traeger Pro 575 with Signature pellets for grilling. Being the smaller model, I grilled the vegetables on their own prior to grilling the short ribs. I kept them in the oven on its lowest setting to keep warm.

If you don't have a grill, you can cook these short ribs indoors on a grill pan or large skillet. Cook both sides over medium-high heat until the beef reaches 165ºF internally.