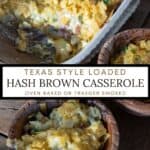 First things first, what is a Texas hash brown casserole? It’s similar to your classic holiday season hash brown casserole with a few Texas twists like poblano peppers and diced green chiles, a queso blanco cheese sauce, and a crushed tortilla chips crust instead of traditional corn flakes. You also have the option of making smoked hash brown casserole on a grill, though baking in an oven works just fine.

I’ll walk you through the recipe and all its ingredients below, and you’ll find a printable recipe card at the bottom of the post. Don’t hesitate to leave any questions you have in the comments section below.

Like many great recipes, this hash brown casserole starts with cooking bacon. Being a Tex-ified recipe, something like the chorizo from our chorizo queso would work great here as well.

I prefer slicing my raw bacon into thin strips for faster, more even cooking. But you can totally throw your bacon straight in the pan and crumble it later.

Once the bacon (or your choice of meat) is cooked, transfer it out of the pan, leaving the rendered fat behind for some diced peppers. The recipe calls for poblano peppers, but bell pepper or any pepper would work great. Adding a jalapeño would definitely give your hash brown casserole and spicy punch.

Side note: If you’re making this dish for a hootenanny and feeding a crowd, buy some extra peppers and make my Tex-Mex stuffed poblano peppers.

Our classic southern hash brown casserole calls for Velveeta. It’s hard to beat processed cheese for sauces like this, so I stuck to the script with one small twist. Beloved Texas grocery store, H-E-B, makes their own version called Easy Melt Queso Blanco.

It gives this hash brown casserole a green chile white queso feel that’s hard to beat. If you’re not in Texas, Velveeta makes a white version of their classic cheese block as well. You can also use other melting cheeses like Monterey Jack or Colby Jack.

Another change from the classic recipe is the use of another H-E-B product, cream of poblano soup. They also make a cream of jalapeño soup for the spice lovers out there. If you don’t have access to either, cream of mushroom or chicken soup both work fine as replacements.

Then you have diced green chiles, sour cream, butter, and the cooked bacon. And that’s it for your cheese sauce.

Our classic recipe uses frozen shredded hash browns, but I opted for refrigerated Simply Potatoes O’Brien. This adds some extra peppers to the mix, but classic shredded potatoes would obviously be fine.

How to Make Your Own Hash Browns

It’s easy to make shredded hash browns at home. Simply grate russet potatoes (peeled or unpeeled, your choice) into a bowl of water to remove excess starch. After soaking for 5-10 minutes, drain the potatoes and pat dry before using.

You can also use a food processor to make hash browns by slicing the potatoes into manageable pieces and pulsing a few times. This method is a bit more inconsistent with size, but the simplicity might be worth the trade off.

The recipe card below has instructions for both. While you can’t go wrong with smoked cheesy hash browns, I will say the oven might be the way to go unless you already have the grill fired up. The tortilla chip crust doesn’t pick up that much smoke in the short cook.

If you wanted to throw other sides on the grill alongside your smoked cheesy potatoes, our Traeger smoked cornbread and smoked mashed potatoes both cook in a similar temperature range. And all these sides would go great with a holiday smoked turkey so you’re optimizing the grill usage.

How to Get More Smoke Flavor from Your Traeger

You could make smoked cream cheese to use in place of the queso blanco or sour cream, and you could smoke bacon on its own before going into the sauce. Or you could smoke the entire cheese sauce on its own at a low temperature before adding the hash browns and crushed tortilla chips. My Traeger smoked queso cooks for about an hour at 250ºF, for an idea on time and temperature.

That should be everything you need to know. You’ll find the recipe card below. Once you’re the star of the party with this smoked hash brown casserole, I’d appreciate it if you came back and clicked the 5-star rating to leave a recipe review!