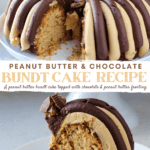 After creating my Peanut Butter Cake recipe, I thought it would make a perfect bundt cake with a few changes, of course. So, I did just that. The result is a peanut butter bundt cake stuffed with peanut butter chips and topped with chocolate buttercream and peanut butter frosting.

While this recipe has several components, don’t let that discourage you! Each step is fairly simple and easy to achieve.

Have no fear, I will provide a recipe walkthrough with step-by-step instructions and photos of each stage of the process. You’ll also find some helpful recipe notes sprinkled throughout the post. I encourage you to read them!

However, if you’re feeling brave, feel free to scroll down to the bottom of the post and simply use the recipe card provided.

Just like in my chocolate pumpkin bundt cake recipe, all you need to make this cake is a mixing bowl, a stand mixer (a hand mixer will work just fine too), and a bundt pan. If you’re using a stand mixer, it will be doing all of the heavy lifting for you. You’ll find your most strenuous task to be folding in the egg whites and peanut butter chips at the end.

Once all of the ingredients have been whisked together, set aside.

Using the paddle attachment on the stand mixer, cream the butter, peanut butter and brown sugar together on medium to high speed. Beat until the mixture is light and fluffy, about 3-5 minutes.

Be sure to scrape the bowl down halfway through to prevent any lumps from sticking to the bottom of the mixing bowl.

Reduce the mixer to low speed and add the egg yolks. Mix until the egg yolks are fully combined, about 1-2 minutes.

Mix until just combined. Be sure to scrape down the sides and bottom of the mixing bowl, to make sure that all of the batter is getting evenly mixed.

As always, scrape down the sides and bottom of the mixing bowl to ensure that all of the batter is getting mixed evenly and no lumps remain.

Step 6: Whisk egg whites and cream of tartar together until stiff peaks begin to form.

Typically, trying to mix two egg whites in the stand mixer will take a hot minute to get going since it’s such a small amount of liquid.

I like to “pre-whisk” the egg whites and cream of tartar with a hand whisk to get it started and finish it off in the stand mixer to achieve the stiff egg whites I’m looking for.

Just like in my German Chocolate Bundt Cake recipe, you will be folding egg whites into your cake batter. Using a rubber spatula, gently fold the egg whites and peanut butter chips into the cake batter. This will require a bit of patience and arm muscles, but it’s worth it in the end.

Step 8: Pour the cake batter into the prepared pan and bake.

Pour the cake batter into a prepared bundt cake pan. Prepare the cake pan with generous amounts of butter to grease the bottom and sides of the pan.

Bake the cake at 350ºF for 45-50 minutes. Around the 20 minute mark, be sure to cover the cake with aluminum foil to prevent the top of the cake from burning. Bake for the remaining 25-30 minutes covered.

The peanut butter and chocolate bundt cake is finished when a toothpick inserted comes out clean.

Here you will find my Peanut Butter Frosting Recipe. For the Chocolate Buttercream Frosting, check out Sally’s Baking Addiction’s post here. It is nestled in one of her fabulous cake recipes and is the perfect companion for my creation.

If you wanted to skip out on making the chocolate buttercream, you can. I would prefer the peanut butter frosting, if I had to choose between the two. But, you can’t beat when you add both!

To make the Peanut Butter Frosting, all you need is some butter, peanut butter, powdered sugar, heavy cream, vanilla, and salt. Whip them up in a stand mixer and you have one of the tastiest frostings out there!

Step 1: Beat the butter and peanut butter together until smooth.

Using the paddle attachment on the stand mixer, beat the butter and peanut butter together on medium to high speed until smooth. You will have to scrape down the bowl a time or two to make sure that the butter completely incorporates into the peanut butter.

Mix in the rest of the ingredients on medium speed for 3-5 minutes, until a smooth and fluffy frosting begins to form.

To decorate this Peanut Butter and Chocolate Bundt Cake, place both of the frostings into separate piping bags. Once the cake is completely cooled, pipe the Peanut Butter Frosting and the Chocolate Buttercream in alternating lines on the cake.

But, there’s no need to sweat it! It can look however you like and still taste great. Let me know what you think down in the comments below. And, if you’re on the lookout for some more chocolate and peanut butter recipes, check out our Chocolate Peanut Butter Ice Cream Pie recipe.

For the Peanut Butter Frosting

Recipe for chocolate buttercream can be found on the Sally's Baking Addiction blog.