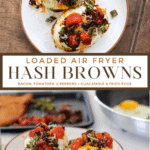 Whether you’ve seen the new trend of making avocado toast with frozen hash browns or are just looking for an answer of how to cook frozen hash brown patties in an air fryer, you’re in the right place. My loaded air fryer hash browns call for air frying bacon, tomatoes, and peppers alongside hash browns before serving with spicy guacamole and fried eggs for a complete breakfast spread in about 20 minutes.

This recipe was inspired by the recent trend of making avocado toast on air fried hash browns instead of toast, and I wanted to put a spin on that by adding air fried veggies and bacon to the mix. Here’s everything you’ll need:

You’ll also need guacamole, fried eggs, and any other toppings like hot sauce, salsa macha, queso fresco or cheese for serving. While you can make air fried eggs, you’ll already have a lot going at once in the air fryer. And it’s hard to beat a pan fried egg.

For the guacamole, the recipe calls for the single serving cups of Wholly Guacamole. You can definitely use freshly sliced or smashed avocado or homemade guacamole instead.

How to Make Loaded Hash Browns in an Air Fryer

The recipe card below includes instructions for making the recipe in both a single-basket and double-basket air fryer. In the recipe video, you’ll see me using a 10-quart Instant Pot Vortex Pro with a top and bottom rack (pictured below).

Since every air fryer is different, you may need to slightly adjust the cook time. The reason the recipe calls for air frying the bacon at a lower temperature first is so the fat has time to render and the bacon evenly cooks and crisps. Cooking at too high a temperature will cause the bacon to burn easily and cook unevenly.

You can also cook the bacon in the pan you’re using to fry your eggs, if you’d like to pop the veggies and hash browns in the air fryer on their own.

Another fun thing to do with a single basket air fryer is cooking the bacon directly on top of the hash browns. Check out my loaded air fryer tater tots for an example of this method.

The picture above should give you a good idea of what you’re looking for on the air fried hash browns and veggies to adjust the cook time for your air fryer.

All that’s left to do is fry some eggs. I like to use a little oil or butter and spoon hot oil over the whites to cook the top side of each egg faster, similar to this crispy fried eggs recipe.

Now, you should be ready to get cooking! I’ll be sure to answer any recipe, ingredient, or air fryer questions you might have in the comments below. And be sure to leave a recipe review once you use this recipe to make your own loaded air fryer hash brown patties.