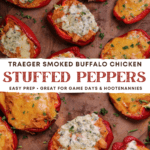 Whether you’re new to the Traeger grill like us or an advanced smoker, we think you’ll find these smoked buffalo chicken stuffed peppers to have an overwhelming surplus of diggity. They’re easy to make, with a one-pan creamy buffalo chicken filling and the option to use pulled rotisserie chicken. You should be able to get them in the smoker in about 20 minutes or less!

Here’s a look at everything you’ll need, grouped together by recipe stages:

The recipe calls for a rotisserie chicken to save some time but if you wanted to smoke your own chicken, you could do something like my Traeger grilled chicken or slow smoked chicken breasts or whole Traeger grilled chicken. We love pressure cooking around here and have made these smoked peppers with our Instant Pot buffalo chicken dip as well.

To get rolling, you’ll want to preheat your smoker to 350ºF with the lid closed while you prep the filling. It will only take around 10 minutes to prep, 10 minutes to cook, and another 5 minutes or so to stuff the peppers.

Some color on the onion is okay, but you’re really just looking to soften them before adding the garlic and cooking for about a minute until fragrant. Then the ranch seasoning goes in.

Add buffalo sauce and chicken broth to the skillet.

Use the sauce mixture to deglaze your pan and get any fond stuck off the bottom.

Add cream cheese and some cheddar jack to the skillet, stirring to fully incorporate.

To make faster work of this, we like to break or cut the cream cheese into smaller pieces before going in the pan.

If you’re working a bit slower and notice your sauce start to thicken too much or stick to the pan, get it off the heat.

Be sure to slice the peppers in half through the stem. Since you’ll smoke the peppers directly on the grill grates, it’s pretty much impossible to get them to stand upright.

We found six perfectly flat bottomed bell peppers and still had a few tip over during smoking. Nobody wants creamy buffalo chicken all over their Traeger! This means buying the longer, more narrow bell peppers is your best bet for these smoked peppers.

We found this amount of buffalo chicken filling to be perfect for six bell peppers, but you may want to buy an extra pepper or two in case you’re using smaller peppers. We’d hate for you to end up with extra filling that you have to shovel in your mouth with chips or something.

Smoke for 45 minutes at 350ºF before adding cheese and smoking an additional 10 minutes.

You’re looking for a soft pepper with some grill marks and slight wrinkling. Once you’ve got that going on, it’s time for the cheese. We think gorgonzola or the controversial blue cheese goes great with buffalo chicken, but cheddar jack or something similar is always a safe bet.

Pepper Note: If you’d like to use another type of pepper, check out our smoked stuffed poblano peppers. We found poblano peppers cook a bit faster on the Traeger than bell peppers.

Dismount Tip: We found using a large spatula to transfer the smoked peppers from the Traeger worked better than tongs.

Traeger Note: We use the baseline Traeger Pro 575 with Signature pellets.

Top your smoked peppers with green onion or parsley and serve!

As for what to serve with your buffalo chicken stuffed peppers, Traeger has a recipe for crispy no-fry potatoes that would go well. We have an air fryer potato wedges recipe that you could whip up right before your peppers come off the smoker, or you could go with something like these smoked vegetables or grilled carrots.

Whatever you end up serving with your smoked buffalo chicken stuffed peppers, we’d love to hear about it! Let us know what you think about this recipe in the comments or with a recipe review. If you have a question about the recipe, you can leave it there as well. And if you have more leftover smoked meats like brisket, check out our leftover brisket fried rice and leftover BBQ chicken quesadillas recipes next!

For the Smoked Peppers

*I used a large rotisserie chicken. Some smaller chickens may only yield 14-16 oz of pulled chicken. The recipe should work fine with slightly less chicken or you can use a second. You can also use any smoked or pulled chicken to make these stuffed peppers.

Hey there, we made these last night I made the prep chopping up everything and getting ready and my hubby was cooking things up while I took the pups for a walk.

When I got back in he was like ... I messed things up :) he thought I had substituted the gorgonzola for the cream cheese and said he ended up putting the cream cheese as a topping before he put it on the Trager, which my reply was .. "hey it's cheese Im sure it will be just fine :))" and it was delicious. However I could not find anywhere in the directions where it says add Gorgonzola although the ingredients list calls for 4 oz. I would think you just put it in with the cream cheese?

Thanks so much :) I will most definitely make this again so now I know how to do it.

Hey Helene, good question! I could be a bit more clear on the cheese situation. The gorgonzola and cheddar jack go on top at the end of smoking. I did half of the stuffed peppers with cheddar jack and half with gorgonzola. Sounds like you guys made it work either way. Thanks for pointing this out.