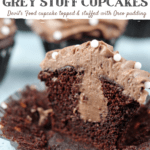 During our Disney World Food and Wine tour this summer, my husband and I tried the famous Grey Stuff Cupcake in Magic Kingdom. I immediately knew I had to recreate this delicious treat at home. After all, what could be more exciting than bringing some of the Disney magic to your own home in the form of a cupcake?

When deciding on what cupcake recipe to use, I knew that my favorite Devil’s Food Cake recipe from Stella Parks was the perfect base for the cupcake. You’ll see that I’ve used it for several of my other recipes like my Devil’s Food Oreo Cupcakes recipe or my Devil’s Food Chocolate Cupcakes with Speculoos Cookie Butter Frosting recipe. It’s a simple, no fuss recipe that tastes way too good for how simple the recipe is!

And since I wanted to bring the magic of Disney home, I used the original recipe released by Disney for the Grey Stuff. It’s a fairly simple recipe and just as tasty as eating it straight from the theme park. The only “fancy” bit of equipment that you’ll need for this portion of th recipe is a food processor.

Making the The Grey Stuff

Turns out the Grey Stuff is an Oreo pudding that is super easy to make! The only change I made to the original recipe is using homemade whipped cream instead of the store bought stuff. Ever since I learned how to make whipped cream at home, I refuse to use anything else. It’s too easy to make and so much better than anything from the store.

You’ll see that the pudding doesn’t look super grey, but rather brown. You’ll have to take that up with Disney though, since the recipe is theirs. I’m not sure if there’s a secret they’re hiding to make it grey, but I do know that it tastes delicious regardless.

Step 1: Mix cold milk and vanilla pudding together until the mixture has thickened.

It will take about two minutes of constant stirring for the mixture to thicken to the desired consistency. Once done, place the pudding in the fridge to chill for two hours.

Step 2: Puree the Oreos into fine crumbs by blending in a food processor.

Using a food processor is important to ensure that the Oreos are ground into extremely fine crumbs. Simply crushing the Oreos will create too many large pieces and an uneven texture that will not blend well into the pudding mixture.

Step 3: Gently fold the ground Oreos into the chilled pudding.

Make sure that the Oreo crumbs are evenly distributed into the pudding mixture. The mixture will be fairly thick and sticky before adding the remaining ingredients.

It will take about 3-5 minutes of mixing on high speed for stiff peaks to begin to form.

Once the whipped cream and chocolate pudding have been fully incorporated, place the Grey Stuff in the fridge to chill for 1-2 hours before using.

This cupcake recipe is one of my favorites. You’ll see it several times on the blog and each iteration is better than the last! It’s my most frequented recipe because it’s delicious and it’s ridiculously easy to make. All you need is a large sauce pan and cupcake molds to get this recipe done!

Step 1: Add coffee and butter to a large sauce pan and melt together.

Stirring constantly over low heat, the butter will be completely melted in about 3-5 minutes.

Step 2: While the coffee and butter mixture is still hot, add the cocoa powder and chocolate chips.

The heat from the melted butter mixture will melt the chocolate chips and ensure that all the ingredients combine together.

Step 3: Add the light brown sugar, salt, and vanilla to the chocolate mixture.

Mix everything together until the mixture is smooth and silky.

Step 4: Add the whole eggs and egg yolks to the mixture.

Make sure that the chocolate mixture has cooled off before adding the eggs. This will ensure that none of the eggs get cooked from the residual heat and create scrambled eggs.

Gently whisk everything together until all the ingredients are fully incorporated.

Step 6: Pour the batter into the cupcake molds and bake.

Assembly for these cupcakes is fairly easy, aside from the added step of filling each cupcake with pudding. You’ll need several piping bags, a small round tip, and a star tip. Once the cupcakes have been filled, all you have to do is pipe some pudding on top of each cupcake.

Step 1: Fill each cupcake with pudding.

Step 2: Pipe pudding on top of each cupcake in place of icing.

Using a star piping tip, pipe pudding on top of each cupcake in place of icing. You can top the cupcakes without a “fancy” piping tip, but the end result will not be as pretty.

Once you sprinkle some edible sugar pearls over all the cupcakes, you’re good to go! While the pudding doesn’t truly have the grey color, as promised in the title, I can assure you that the stuff does taste just as good as the concoction at Disney World. Maybe one day they will share their secret for the mixture turning grey. Until then, enjoy this special treat!