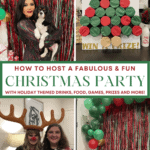 This year was our first holiday season as a married couple and we thought hosting a Christmas party with all of our friends was the perfect way to celebrate. We had so much fun planning the decor, games, prizes, and food for our version of a merry shindig.

We wanted to host a holiday party full of active games and fun prizes that our guests could get excited about. We also added a few challenges that would make us all laugh, like Jingle Bell Shake or Poop the Potato (more on that later). Overall, I think it’s safe to say we achieved our goal and put on quite the party! We are already planning the activities for the party next year.

If you’re on the lookout for some hosting inspiration for your Christmas party, we’ve got you covered. I’ll include everything we did and where you can get the supplies to put on the best holiday party!

The first thing your guests will see upon arrival is all of your holiday decor. It’s the perfect way to set the tone for the party and get your guests in the holiday spirit. With that in mind, I began my search for cute and affordable party decorations.

For my husband’s 30th birthday this year, I got a lot of party decor from Party City. From helium inflated balloon bouquets to table centerpieces, I went all out with fun birthday-themed decorations around the house. While it looked great and I loved it, I wanted to do something a little more affordable so I could splurge on other aspects of the party, like prizes and games.

So, I found a balloon garland and a Christmas curtain backdrop on Amazon. I pieced both together for a statement decor piece that also served as a photo backdrop for all of the party photos. It was a big hit and perfect for the occasion.

Pro tip: get an electric balloon pump to save your lungs some work if you plan to make a balloon garland. If you’re like me and love to host parties, you will find this little gadget extremely useful and worth the money.

All of the festivities of the night were structured around all the prizes to be won. We wanted to give a real incentive for everyone to be really invested and motivated to play all of the games. So, we decided to have 10 prizes up for grabs. The prizes were at all different price points, which was reflected in the amount of tickets they were worth.

In order to get tickets, each player had to win a game and they were then able to “poke” the tree. A found the Poke-A-Tree game on Pinterest and knew I just had to have it at my party! It’s a simple holiday game that hides small prizes in cups covered in tissue paper and players have to poke the cups to reveal the prizes inside.

When building the Poke-A-Tree game, I hid tickets, candy, and shot cups in the cups. Each cup had different items in it, so poking the tree guaranteed a small prize, but not necessarily a ticket. This kept things interesting and all the players competitive.

We really liked structuring the prizes this way, but ran into a few issues with the way the tickets/prizes were structured. Next year we will eliminate the tickets and just hide individual vouchers for each prize in the cups. That way players know which prize they have won and there is no confusion of choosing the prizes based on the amount of tickets earned.

When planning the festivities of the Christmas party, I knew I wanted games that would get my guests out of their seats, laughing, and motivated to compete. To find the games we would play, I went to the number one place to find fun, DIY games that were sure to be a hit at the party – Pinterest.

The main thing I was looking for were games that were fun, simple, and group friendly. After scouring Pinterest for a few days, I found this post from the blog It’s Always Autumn and picked a few games from the extensive list. We settled on the following 8 games:

To play this game you need a few things – bells, empty kleenex boxes, and string. The goal of the game is for each player to wear an empty kleenex box filled with bells tied around their waist and shake the bells out of the box. The first player to shake out all of their bells is the winner.

It’s as funny to watch as it sounds and everyone had a blast shaking their booty to get all the bells out. However if this is a game you choose to play, make sure you’re playing in a spot that it’s easy to retrieve the bells from. We made the mistake of playing all over the living room/kitchen and had a hard time finding the bells for the next round of players.

Next up we had a bunch of candy canes in a clear bucket and each player had to guess how many were in the bucket. The first person to guess correctly was able to poke the tree for a chance at more tickets.

The Guessing Game was a great lead up for the next game. The candy canes were poured out on the table in a giant pile, where two players would use a candy cane in their mouth to hook as many other candy canes up and into a bucket with no hands! The player with the most candy canes dropped in their bucket was able to poke the tree for a chance at more tickets.

Perhaps the most loved game of the evening was Dice Doubles! This game got everyone the most excited and invested by far.

To play, take a prize and wrap it with wrapping paper a bunch of times – like 10 times more layers of paper than you think you should do. I wrapped a small, gag gift about fifty times. I always keep all my scrap wrapping paper until the end of each Christmas season because you just never know what size gifts you’ll need to wrap. This came in really handy for this game!

Once you do that, give the players a set of oven mitts and dice. To get the prize that has been wrapped too many times, players roll the dice clockwise. The first person to roll doubles must put the oven mitts on and try to unwrap as much of the prize as they can before the next player rolls doubles. They must then relinquish the prize to the player who has rolled doubles and it continues until the prize is completely unwrapped.

This fun game can be found on Amazon for $12. It comes with a set of antlers and ten rings to play with. Even better, it comes with a small pump to inflate all of the pieces. This game was a big hit and super fun to watch.

We decided to order a second set for next year so we can get more teams playing at the same time!

When planning for the party, I thought we would need a lot of games to fill up the evening. So, I was left scrambling trying to come up with lots games that were fun and affordable to create. This led to me the balloon pop game, which I don’t really recommend. We will definitely not do this game next year, but you live and you learn!

To play this game, each player gets a set number of balloons and has to pop them with winter gloves on. The first player to pop all of their balloons is the winner.

We played this game slightly different than the original rules to allow each player to play individually and have a better shot at getting more tickets for prizes. To play this game, each player waddles across the room with a potato between their legs and drops it into a bucket. The fastest player to “poop” their potato into their bucket wins.

For the last game of the night, we played Christmas themed bingo. I found free printable bingo cards on Pinterest from the blog Grace & Good Eats. I loved the Christmas themed cards and all the little holiday characters on them. To keep things festive, we used holiday Hershey’s kisses as the bingo markers.

Since we run a food blog for a living and, essentially, live in the kitchen, we like to treat ourselves to the luxury of ordering food when we are hosting. It allows us to focus on getting the house ready and not worry about cooking and cleaning on top of everything else.

In our group of friends, we always have a potluck for parties so that there’s plenty of food and everyone is able to contribute. I always like to bring dessert since it’s my favorite food group. We decided on two of our favorite desserts for our food contribution to the party.

The first dessert we got was from one of our favorite local bakeries, Hayley Cakes & Cookies, here in Austin. We went for brownies that were decorated like Christmas trees. They were super cute and so tasty! We can always count on Hayley Cakes & Cookies for showstopper desserts that taste even better than they look.

The second dessert we served was a kringle from O&H Danish Bakery in Wisconsin. They make a variety of flavors that are shipped fresh to you! All you have to do is pop them in the oven for a few minutes and it’s good to go. Mason and I order kringles every Christmas as a tradition and it was so fun to be able to share that with out friends. The kringle was a total hit and gone almost immediately.

Hosting a Christmas party was the highlight of our holiday season! We had the best time prepping, planning, and spending time with our friends. We enjoyed it so much so that we have called dibs on hosting the Christmas party next year! We will be sure to update you all on what we chose to keep, change, and what new things we will try.

Christmas time is already such a special time of year and I believe it’s made even better surrounded by family and friends. Get out of your comfort zone and give hosting a try! You just might learn, like we did, that it’s quite a bit of fun.